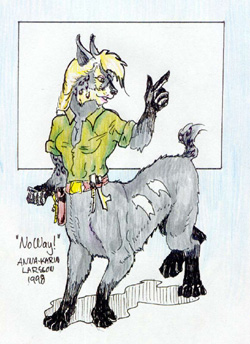 "Are you nuts!?" hollered TwoSpotz over the noisy engines. "I'll never go back there! It's out of the question, Blackpaw!"

The two grey lynx-chakats had been planning on going for a space-trek towards the nebula clouds for some time now. Blackpaw felt the old call of space upon hir again, and to bring hir own offspring along would be neat. They pretty much had the same interests, so they liked each other's company.

"Might be some cool ladies out there, you know! Isn't it about time you at least tried to find someone for yourself?" asked Blackpaw and grinned at hir. TwoSpotz made an ugly face at hir Sire and, with some easy jumps, shi headed across hot air tubes and moving hydraulics to get to the machine-room's floor. Blackpaw followed as well.

"Alright. But think of it will you?" asked Blackpaw. Shi looked very much like the child shi had once sired. This was hir only offspring and it would most likely stay that way. Shi had never truly loved anyone since the tragic death of TwoStripe, TwoSpotz's mother. Side by side, they left the noisy engine-room behind them and came out in the old ship's Main Engineering room. Several other staff-members of the ship were there as well.

"What would we do without you two?" asked the Commander of the ship as he walked up to them. Even if the ship was old, she was one of the busiest traders around, and they relied on the two chakats to keep her going at all times.

"Probably be stranded off the edges of the Yeager Nebula or so!" grinned Blackpaw as shi washed off some of the oil and dirt from hir front paws. They both looked like they'd taken a bath in a coal-pit.

"Next time we dock, get an overhaul of her. It's so darn dirty in there I can hardly see what my fur looks like!" complained TwoSpotz loudly.

Blackpaw glared at hir offspring as they departed. TwoSpotz was quite a vain chakat. Hir wardrobe of clothing was half of hir luggage at any time they switched employers or ships.

"I'm taking a shower, then I'm off to the bar as soon as he docks this monster!" said Blackpaw and stretched hir arms high above hir head. TwoSpotz nodded in agreement.

"It is Port Mundipot next, right?" asked TwoSpotz as they entered the cabin they shared. Blackpaw nodded and rummaged through the clothes cabinet. Shi hauled out hir traditional red sleeveless polo shirt. Without a word they both hit the showers to get the grime off themselves.

Port Mundipot was an ancient spaceport. It had just been there forever it seemed, and no one had done anything to investigate it. They just kept making it bigger. For each year that passed, it grew both in width, height and stature. It was an independent station that held all kinds of attractions. Bars, gambling and storage were the main ideas about it, but nowadays it also had several hundreds who actually lived in it. And that department grew for each year. Blackpaw, with TwoSpotz in tow, entered the bar as if shi owned it. The nearly identical chakats made a grand entrance. They looked rare among chakats because of their stubtailed appearance. But to see two so alike was even more breathtaking. The bar's owner, a pale almost blue-skinned humanoid male, arranged a good table with an excellent view of the entrance.

"Maybe. See the two Tombaugh females there? If something else doesn't appear soon, I'll bet my credits that we can have some fun tonight ..." shi mumbled and did an excellent job of sneaking a glance at the two blue-black humanoid felines.

The evening seemed to be a hit. It soon dropped in people from a passenger shuttle. A big one as well, judging from the many thirsty and hungry tourists that flooded into the bar. The owner of course was overwhelmed and made sure to pull out extra tables and seats all over the place. Blackpaw was flirting quite wildly with the two black felines. And apparently they did know of the double nature of the chakats and Blackpaw was in an intense male period. It was always the most dominant part of both hir and TwoSpotz's nature, even if shi had enjoyed the times shi had shared with Twostripes a lot. TwoSpotz wasn't very interested in the two felines. Shi was not in a "male mode" as shi used to put it. Shi longed for someone to care for hir and to be just all and more that night. Almost drifting away in hir imagination, shi saw it: a tail with an unusual pattern. Swift like a snake and then it disappeared. Shi got up and pawed away from a surprised Blackpaw.

TwoSpotz walked between the myriads of different people, completely enchanted by the flickering movements of the strange tail. Could it be? Could it possibly be a chakat? Shi walked on, sneaking between two fat yandorks as shi made hir way forward.

Oh yes indeed, it was a Chakat! Two of them actually. TwoSpotz almost dropped to hir haunches. They were gorgeous! Obviously they were very close to each other. Now and then they bent forward and whispered things to each other that made the other one laugh out loud. When one of them suddenly looked up, it was the golden bright-haired puma chakat, and TwoSpotz got the feeling that shi was about to sink through the floor. Shi'd been staring at the two for quite some time. The cougar nudged the spotted one to look around. The spotted one turned hir head and looked as well. Hir thick black hair was cropped off by the shoulders and gleamed blue-black and healthy. They both smiled and seemed genuinely surprised when they came up to hir.

"Why hello!" chirped the cougar and walked around TwoSpotz. The spotted seemed a bit taken as well.

"Um.. Hi. Nice to meet you two. I see you are without a table. Would you two like to join us? We got one up higher where there aren't as crowded." The two grabbed their glasses and followed.

Blackpaw dropped hir jaw to about table height when TwoSpotz came through the crowds with Goldfur and Forestwalker. After the initial greetings, Blackpaw was more than curious about who they were.

"Must be the feline genes who played you two tricks then?" said Forestwalker and sipped hir drink. Blackpaw glanced at hir and held the gaze on hir. It was obvious that the older Chakat had hir mind set on the beautiful chakat this evening.

"Yes, I think so. And my mother had a tan leonine appearance, so it is quite strange!" added TwoSpotz. Shi was delighted to find someone who had travelled as much as Goldfur had.

As the evening continued, they got to know a lot more about the two. TwoSpotz just sat spellbound and listened. Shi had never really got to meet many other Chakats. Hir own mother had been the daughter of a quite odd lonely pair, and the only big gathering of chakats had been when hir mother had died so suddenly. Causes unknown, but it was most likely nature's decision to end hir life very suddenly.

"So you two work on the old rustbucket out there?" asked Forestwalker as shi emptied hir third drink. This was the last one. It was obvious this weird green drink made hir quite giggly and shi had to try to keep a straight face. How Blackpaw had managed to empty four beer glasses was quite unbelievable, considering how strong that beer was. Goldfur and the younger copy were talking with each other and were obviously lost to the world. It wasn't until TwoSpotz looked up and saw that the other two were gone, that shi decided not to spend hir night alone. With a black finger shi carefully traced the delicate nose of the gold-furred cougar.

"So, got anywhere to stay for the night?"

Goldfur's eyes narrowed and a faint smile played on hir lips. "Maybe. But it'll be a bit empty tonight though."

"It doesn't have to. Wanna help a cuddlesick chakat get something done tonight?" asked TwoSpotz and leaned forward. Goldfur raised an eyebrow and nodded slowly. Why not? Shi had a long trip home, and a little adventure would not hurt. After all, this was such a different chakat. It fascinated hir! They were unlike any other chakat shi had ever met. TwoSpotz took hir hand and led hir out of the crowds. With a smug smile Goldfur took the lead and silently led the way to the hotel room shi had rented a few days before their arrival.

TwoSpotz sighed deeply as shi turned around on the big bed. Shi opened hir eyes and looked at Goldfur standing beside hir. Then a dazed smile crept over hir face.

"It's about time..." purred Goldfur, "Want some breakfast?"

"I dunno. I have a perfectly fine goldpudding in front of me."

Goldfur chuckled. This Chakat had spent way too much time among humans. It was obvious that Blackpaw had raised this young chakat among the machinery and humans. This was a chakat that could be welcome everywhere, once shi learned what it meant to be a true chakat.

"Breakfast!" said Goldfur and ruffled the bushy white hair of the grey chakat. Moaning and complaining TwoSpotz got up and followed hir newfound friend out of the hotel room bedchamber. Apparently the room service was good here because an overwhelming breakfast was ready and just waited to be more or less attacked.

"Goldfur? Will you tell me more about the other Chakats? I know so little..."

Goldfur held up a napkin and then sat down by the table, hir tail neatly curled around hir paws.

"I will, if you join me for breakfast?"

TwoSpotz grinned and nodded. This was going to be interesting. A whole new world waited. Hir grandparents and hir sire had told of all the chakats that were out there and it would be an interesting thing to explore and experience.